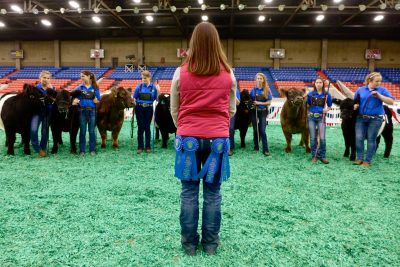 Maine Coast Heritage Trust’s 4-H Club, the Aldermere Achievers, have much to be thankful for this Thanksgiving. On Nov. 18, the club members returned from a whirlwind trip with their Belted Galloway cattle to the North American International Livestock Exposition in Kentucky, the largest all-breed, purebred livestock event in the world.

After a series of successful competitions at four fairs and 14 shows in Maine, the Aldermere Achievers ended their show season with a bang at NAILE, with most of the eight members taking home first and second place awards in various classes. NAILE proved to be an opportunity for the 4-H members to compete against peers from across the country and learn from experienced showmen who attend the expo every year.

The Aldermere Achievers began planning and fundraising for NAILE a year in advance. Frances Pendleton (five-year 4-H member) said: “4-H has taught me to work hard and interact in my community,” according to a news release, which is exactly how the Aldermere Achievers ran their ambitious campaign of raising $17,000 to fund their trip to Kentucky.

With the help of their families, they coordinated more than 20 fundraisers, raffles, bake sales, carwashs and more.

In August, the Aldermere Achievers caught the attention of the Midcoast when they paraded their sheep through downtown Camden while soliciting businesses for donations. After reaching 75 percent of their goal, the Aldermere Achievers received a matching pledge by an anonymous donor, which helped launch them on their way to successfully completing their fundraising by October.

The outstanding performance of the Belted Galloway cattle as shown by the 4-H members led to MCHT’s Aldermere Farm earning the most prestigious award of the National Belted Galloway Show, the Premiere Breeder Award.

“Winning the Premier Breeder award at the National Belted Galloway Show is an honor,” said Aldermere Farm’s general manager Ron Howard. “But no higher honor than to have seen these kids and their families work so hard to get to Kentucky, and then work so hard to achieve all the awards and recognition they so well deserve.”