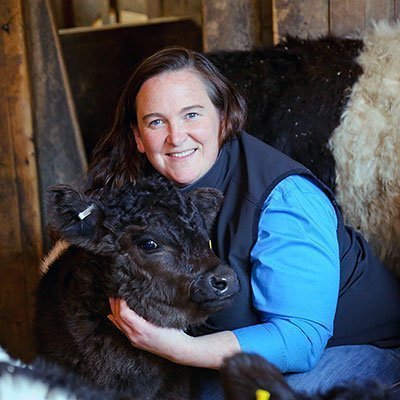 In some of Heidi Howard Baker’s earliest memories, she’s tucked into a barn loft at Aldermere Farm listening to cows bellow in the fields, smelling hay and a salty breeze blowing up from Pen Bay while she waits for her grandfather, then Herd Manager Dwight Howard, to finish work for the afternoon.

Apparently, those early memories on the farm stuck with Heidi. During college, where she received a B.S. in Psychology and Early Childhood Education, she managed a dairy farm and, later, worked as a school librarian. In 2016, she combined her two loves—agriculture and education —as a volunteer at Aldermere Farm, taking a leadership role in the youth programs her father, Ron Howard, formed during his tenure as Farm Manager.

She became Aldermere Farm’s Herd Manager in 2012, stewarding both the award-winning herd and the farm’s growing youth agriculture programming over the past several years.

In January of this year, Heidi took on a new challenge. As MCHT’s new Farm Manager, she now oversees all operations at both Aldermere and nearby MCHT preserve Erickson Fields. With her longstanding connection to the farm and Maine Coast Heritage Trust, she’s off to a running start in her new role.

Heidi is also deeply entrenched in the Midcoast community, having served on numerous boards, councils, and committees, and forged lasting relationships with program participants and people who have generously supported the farm over the years. “I’m excited to be in a position to give back to my community,” says Heidi. “And I look forward to working with MCHT’s staff across the coast—especially as our organization continues to emphasize community outreach efforts.”

The little girl in the loft might not have thought so, but in this case, it’s true: sometimes you don’t have to go far to end up exactly where you’re supposed to be.