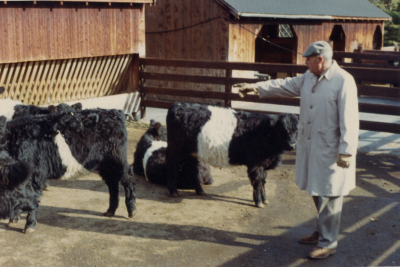 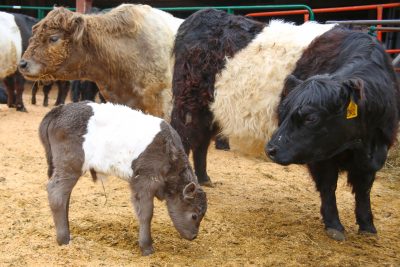 Saturday, May 4th Aldermere Farm at 20 Russell Ave will open its barnyard to the public from 10 AM to 3 PM for Calf Unveiling Day, a tradition that began 16 years ago. During this annual event, visitors enjoy a behind-the-scenes tour of the farm to greet the spring Belted Galloway calves and see Aldermere’s 4-H club in action. This year, the farm will also celebrate its 20th anniversary as a preserve of Maine Coast Heritage Trust (MCHT), a statewide land conservation organization.

The story of the Aldermere herd began in 1953 when the farm’s owner, Albert Chatfield Jr., purchased a bull and six cows, establishing what is now the oldest continuously-operated herd of Belted Galloway cattle in the United States. Mr. and Mrs. Chatfield methodically studied progressive scientific agriculture to revitalize the farmland after inheriting it in 1950. They were especially influenced by the work of Louis Bromfield, whose writings emphasized careful stewardship and organic farming methods. In his will, Mr. Chatfield bequeathed Aldermere Farm to MCHT with the intent of preserving Aldermere Farm’s scenic and ecological integrity. In honor of Mr. Chatfield’s wishes, MCHT has maintained Aldermere as a working farm with Belted Galloway cattle. Today, Aldermere Farm hosts a variety of programs and events to educate the community and encourage sustainable agriculture.