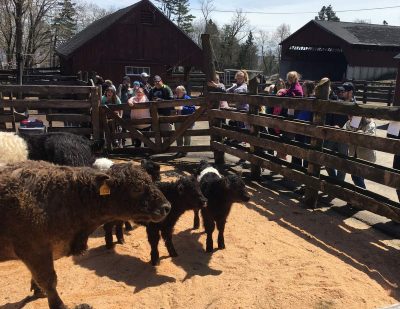 ROCKPORT — The 16th annual Calf Unveiling Day at Aldermere Farm provided the public with its first look at the newborn Belted Galloways as community members turned out in droves to celebrate the occasion. The weather was warm enough for ice cream to melt on the hands of the less diligent children as they ran around, climbing the wooden fences to get a better view of the calves.

Live music drifted from the barn, mixing with excited chatter and the occasional “moooo.” The smell of hotdogs, onions and wood-fired pizza wafted over the yard only slightly masking the pervasive smell of cattle farm.

To the farm staff and the local community, the fact that it remains a farm is vitally important.

It has now been 20 years since the farm’s founder, Albert Chatfield Jr., died and left the 136-acre property to Maine Coast Heritage Trust, and in that time the trust has performed a balancing act between the desire for more community engagement and the need to stay true to its roots.

“It has become such a community asset,” said Polly Chatfield, Albert’s niece. “It has expanded in just the ways he would like.”

MCHT was initially reluctant to take over control of the property. Founded in 1970, the trust had previously dealt only with conservation and stewardship, and as General Manager Heidi Baker said, “never owned a building, let alone 44, and 100 cows.” With very few examples of how such a partnership would function, the task appeared daunting.

For former Farm Manager Ron Howard, though, that blank slate and the challenge it represented was enticing. The son of Dwight Howard, longtime farm manager at Aldermere before MCHT got involved, Ron left the farm after school for what he thought would be the rest of his life, but the opportunity to work on the transition with his parents and get out of a wearisome corporate setting was enough to persuade him to return, he said.. He took over as farm manager in 2000, and over the next several years spent time traveling around the Northeast visiting public and nonprofit farms looking for inspiration and models for the direction the farm should take.

He held local public forums and community meetings to gather ideas on what people wanted from the property. Howard said each one returned the same verdict: “Do whatever you want, but don’t change the way it looks.”

In designing a path forward, Howard focused on one key element. As an adult he had become very appreciative of the skills he acquired growing up on a farm. The common sense, problem-solving and work ethic he had learned as a youth proved beneficial in all aspects of his life. In his corporate job, he said, he always gave preference to people with farm experience for those very reasons.

As a result, along with the necessity of maintaining the appearance, the central goal of the farm became getting kids into programs. Not just for one day or on a field trip, but really integrating them. “The whole objective,” he said, “was to recreate farm life for kids who don’t normally have access or the ability to experience it.”

This vision first manifested itself in the Farm Hands program, a hands-on experience for kids to come work with calves to get them halter-trained and accustomed to being around people. The program, which continues today, also highlighted the importance of agriculture, conservation and sustainability. As it grew in popularity, Howard said, the farm decided to add more intensive 4-H programs. The list of offerings has since expanded to include internships and apprenticeships.

The most recent expansion was the addition of Erickson Fields Preserve. The land, where Chatfield’s herd used to graze, is now home to a four-acre garden that yields 30,000 pounds of vegetables per year and has a contract to provide Good Shepherd Food Bank with produce throughout the summer. In the same spirit of education and youth involvement, Erickson Fields has an apprentice program and participants in the Teen Agriculture program from throughout the Midcoast.

Aldermere Farm is also working with Camden Hills Regional High School for its new internship program, offering students work in cattle management and in the archives. The latter would be assigned to go through many of the old records from the farm, which have not been digitized, to get a more complete history of its early years.

“Maybe we can find out where the name, Aldermere, came from,” said Joelle Albury, Aldermere’s outreach and office manager.

Ironically, the farm does have complete genealogical records on its cattle dating back to the 1960s on the website cattlemax.com, so many Belted Galloways across the country can trace their heritage back to Rockport.

The expansion and evolution of the farm’s programs has had a lasting impact far beyond the local community. Through the internship and apprenticeship programs, people have come from as far as Australia, according to Albury, to learn farming skills at Aldermere and have gone on to a variety of careers.

With small farming in decline nationally, farms willing to take on students have become scarcer. As former apprentice Melinda Buell put it, “A farm willing to take on an apprentice and teach them how to manage cattle and how to engage youth in agriculture is hard to find.” Buell has continued to work with Belted Galloways at Mitchell Ledge Farm in Freeport.

Another former apprentice, Melinda Lee, came to Aldermere for an internship from Ohio State University and returned two years later for an apprenticeship.

Lee said many of the skills she learned, both agricultural and personal, have helped her a lot in her current position as an organization director for the Ohio Farm Bureau.

Both Buell and Lee recall the ability to not only learn skills themselves, but to collaborate with and teach kids as one of the great aspects of the farm.

Aldermere Farm and MCHT have further affected the community through training opportunities for local farmers and helping start the Mid-Coast Farmers Alliance, a consortium of local farmers who work together and share insights and strategies to better understand local farming needs.

For a farm managed by a land trust, that work with and respect for other farmers is very important. Baker, the farm’s herd manager, said the staff works very hard to make sure the sales from beef, hay and cattle pay for the operations of the farm and the money from fundraising is used to help pay for programs. This maintains a level playing field with farms in the area that are not subsidized.

While much of the work done by MCHT is new, Albury said, it is important to remember the groundwork laid by Albert Chatfield Jr. After inheriting the farm in 1950, he studied and integrated progressive farming techniques, notably focusing on the work of famed writer and conservationist Louis Bromfield, who emphasized a scientific approach to land use. Chatfield’s niece Polly said that he had a “deep love for nature,” and a “paternal love for the land.”

After inheriting the property, she said, he spent a lot of time building up the soil and after thorough research chose the Belted Galloway breed for its ability to withstand the climate and because they eat by biting rather than pulling grass. Chatfield also sold and donated to small farmers to help them start herds and pioneered youth programming on the farm. Polly Chatfield recalls people always being around the farm either seeking to buy cattle or to learn from the practices at Aldermere. As Baker put it, “much of the work MCHT is doing above ground, Chatfield did under the radar.”

The success of Aldermere has also helped expand the range of what land trusts can accomplish, a development that Howard said he is especially proud of.

“Prior to Aldermere, land trusts were devoted to preserving open space and undeveloped land,” he said. “Aldermere helped show the value in a community-based project that was close to town.”

As MCHT’s “high profile preserve,” Aldermere Farm has helped generate attention and publicity for the rest of its efforts, which are often far more remote. Polly Chatfield said the farm has brought the importance of conservation to a broader audience beyond avid hikers.

MCHT continues to work closely with other local land trusts and farming organizations and has consulted with similar projects, such as Wolfe’s Neck Farm in Freeport, to assist in their development.

Behind all of the work, there is a clear understanding and appreciation that very little of this transformation could have been accomplished without the generosity of the community.

“The highlight was the wonderful people I was able to engage with,” said Howard of his 17 years managing the farm. He recalled that when the trust began work on establishing Erickson Fields as the agricultural wing of the farm, he was reluctant to ask donors for their support for such an unconventional project. He was pleasantly surprised when at least one large donor urged him to think even bigger, and the project expanded beyond its initial scope.

Howard retired to Hope in 2017, but continues to return to the farm where his daughter, Heidi Baker, now lives and manages the herd, continuing the legacy of the Howard family on the property.