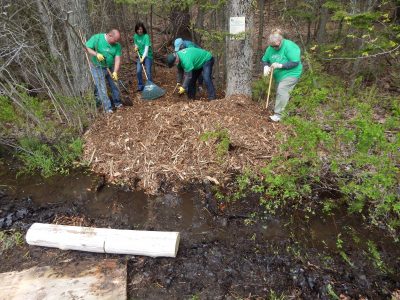 Volunteers from the North East Association of Electric Cooperatives spreading cedar chips on the Spar Woods Trail at Aldermere Farm.

Maine Coast Heritage Trust sends out a huge thanks to a group of volunteers from the North East Association of Electric Cooperatives (NEAEC) for contributing 32 hours of trail work at Aldermere Farm.

During the NEAEC’s annual meeting, which was held this May at the Samoset Resort in Rockport, attendees had the option to participate in a local community service project. A group of sixteen volunteers (some of whom are farmers) elected to spend the afternoon of May 23rd working outdoors – and visiting a herd of Belted Galloways. In two hours, the volunteers built a small bridge, cleared brush, spread cedar chips and beautified two short foot trails and a scenic overlook at Aldermere Farm in Rockport. After finishing their work, the group toured the farm and visited with the calves and cows of the Aldermere herd.

We are pleased to [volunteer] on a farm which is the very root of the highly successful electric cooperatives throughout rural America. ~ Millie Faulkner, Delaware County Electric Cooperative

NEAEC consists of coops from 4 states (ME, VT, NH, and NY) and is part of the National Rural Electric Cooperative Association, which has helped to network the more than 900 cooperatives across 47 states and in doing so has established the 7 cooperative principles: 1) Voluntary and Open Membership 2) Democratic Member Control 3) Member Economic Participation 4) Autonomy and Independence 5) Education Training and Information 6) Cooperation among Cooperatives and 7) Concern for Community.

NEAEC meets annually for training, sharing of ideas and strategic planning. These meetings rotate through the 4 states with Eastern Maine Electric Cooperative headquartered in Calais, Maine being the host for 2019. Maine is the first state to benefit from a community service project hosted by the NEAEC. Millie Faulkner, who is from the Delaware County Electric Cooperative in NY and helped organize the 2019 annual meeting, commented: “We are pleased to [volunteer] on a farm which is the very root of the highly successful electric cooperatives throughout rural America.”