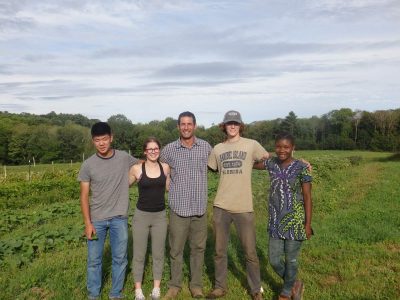 ROCKPORT — Erickson Fields Preserve held a Harvest Celebration Thursday, Aug. 29, that marked the end of the season for many of the Teen Agriculture Crew who, under the direction of Program Manager Aaron Englander, operate the 4-acre garden.

The event also served as an opportunity to promote the mission of the Knox County Gleaners, a recently formed group that harvests produce left in gardens by farmers or home gardeners and donates it to local food pantries and soup kitchens.

Englander thanked all of the Teen Ag crew for their hard work throughout the summer, which includes providing more than 20,000 pounds of produce annually to local food banks at a reduced rate as part of the Mainers Feeding Mainers Program. The farm also sells produce to several area restaurants, including Long Grain, Sammy’s Deluxe, Graffam Brothers and Nina June, as well as local schools.

Many of the eight crew members, who represent five high schools, have worked at Erickson Fields for multiple years, and the program emphasizes peer leadership, where more experienced members help teach necessary skills to newer members.

Englander and the four crew members in attendance led the crowd on a tour of the gardens, discussing specific crops and planting practices, and answering questions. The crew members also talked briefly about their experiences at the farm and how it will affect their plans.

Charlie Cooper, a recent graduate of Camden Hills Regional High School in his third year in the program, said he plans to work through the fall at the farm before traveling to work on other farms as part of the World Wide Opportunities on Organic Farms program.

Isa Brown, who attends Governor’s Academy in Newbury, Mass., said “being outside every day with awesome people and putting in hard work that directly results in delicious food” has been very rewarding.

This also marks the 10th anniversary of Maine Coast Heritage Trust’s purchasing Erickson Fields and Joelle Albury, outreach and office manager at Aldermere Farm, said the programming MCHT has developed at the 164 West St. site, which includes Teen Ag, Kids Can Grow, involvement in the Mainers Feeding Mainers program, and the recent partnership with the Gleaners, “really represents the community effort it took to make this happen.”

Members of the Knox County Gleaners in attendance discussed ways to get involved with the program. Gardeners can let the group know if they have too many vegetables in their garden, at which point the Gleaners will come to their garden and harvest produce that would otherwise go to waste. They will take it to food pantries, soup kitchens and behavioral health homes. Gleaning can also be done at farms after harvesting is done for the season. Both Erickson Fields and Knox County Gleaners continue to seek volunteers.